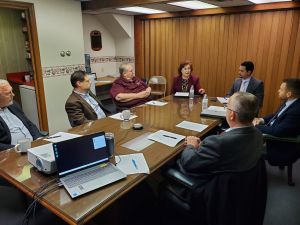 Members of The Columbia Montour Chamber of Commerce’s Governmental Affairs Committee recently discussed transportation infrastructure funding, solar regulations, career and technical education, and other business-related issues with the new State Representatives for Columbia and Montour counties. While Lynda Schlegel Culver has been a Representative for twelve years, the 108th District she represents now includes Montour County. Robert Leadbeter replaces David Millard as the Representative for the 109th District, which encompasses Columbia County. Alex Halper, vice president of government affairs with the Pennsylvania Chamber of Business and Industry, also participated.

Prior to the discussion of issues, Culver, Leadbeter, and Halper talked about the unusual start to the House session. While Democrats won a 102-101 majority following the November election, Republicans will hold a temporary majority until several seats are filled in special elections due to the death of one member, another being elected to Congress, and Anthony Deluca being elected Lt. Governor. Rep. Culver is seeking to replace John Gordner who resigned as State Senator in December to take a staff position in the Senate. A special election for that seat is set for January 31st. If Culver wins, a special election to fill her House seat would take place in the May primary. Rep. Mark Rozzi, a six-term Democrat from Berks County, was elected Speaker of the House after being nominated by two Republican members. After being elected, Rozzi announced that he will lead as an Independent, and not caucus with either party.

Following PennDOT’s failed plan to implement tolling on select interstate bridges across the state, The Chamber of Commerce is joining other business groups in calling for sustainable, long-term funding solutions for Pennsylvania’s transportation infrastructure. Rep. Culver served on a task force to explore this issue. One strategy is to reduce the amount taken from gas tax revenues to fund State Police, though she noted that they do provide services supporting transportation. Another funding idea is a five-year pilot which would allow drivers to pay an annual flat fee or based on mileage driven. Halper provided information on legislation being proposed in the House that would levy mileage-based user fees on electric and hybrid vehicles. The Senate Transportation Committee has advanced a bill that would cut the state’s gas tax and another that would dedicate gas tax revenues to road and bridge projects and fund State Police from the Motor License Fund. The increased cost of projects due to prevailing wage requirements was also discussed.

Several companies are working to develop commercial solar generation installations in Columbia and Montour counties due to the access to transmission lines. The Chamber of Commerce encourages the development of zoning that allows for commercial solar generation while reasonably protecting the environment and neighboring residents and businesses. Pennsylvania does not currently have statewide guidelines for such installations, leaving local municipalities with limited resources and expertise to develop zoning language on their own. The Chamber is calling on legislators to develop base guidelines that would assist local municipalities and provide a level of consistency for companies looking to develop in multiple locations. The Representatives talked about legislation that would address the decommissioning of such installations and Leadbeter noted his discussions with the Pennsylvania Farm Bureau about protecting class one and two soils from such development.

With workforce continuing to be a critical issue for employers of all sizes and types, funding for career and technical education, apprenticeships, and EMS personnel was also discussed. Chamber president Fred Gaffney asserts that, as local school districts are developing their own career and technical education programs, the funding model for Columbia-Montour Vo-Tech and similar schools should be changed so they are not reliant on the sending districts for funding. Jim Nemeth with Autoneum North America has worked for years to develop apprenticeship programs for area manufacturers, and highlighted the Vo-Tech school as a valuable asset in the training process that could be better utilized by students and adults looking to upskill. Tim Wagner, representing the Bloomsburg Volunteer Ambulance Association, also noted the critical need for EMS training and career development as volunteerism decreases.

The meeting concluded with a discussion about the importance of bipartisanship in the next legislative session and both legislators were provided a copy of The Chamber of Commerce’s recently-adopted code of conduct for consideration. The Pennsylvania Chamber of Business and Industry has been highlighting bi-partisan accomplishments from the last session, including the plan to reduce the state’s corporate net income tax rate from 9.99% to 4.99%. Among their priorities is ensuring the phasing down of the tax stays on track, or gets accelerated. The PA Chamber’s full 2023 legislative agenda is available at pachamber.org/legislative_agenda.