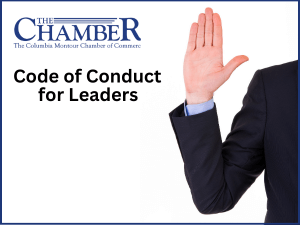 The Columbia Montour Chamber of Commerce board of directors has adopted a code of conduct to encourage greater collaboration among elected and other officials. The document was developed in response to increasing polarization and unprofessionalism among people in leadership positions, resulting in organizational dysfunction and decreasing engagement in the decision-making process. Elected officials and governing bodies, including non-profit organizations, are invited to adopt the code of conduct.

“Individuals with extreme positions and personalities are dominating meetings and public attention at all levels,” said Fred Gaffney, Chamber president. “This code of conduct is intended to encourage decorum, professionalism, and collaboration among officials, leading to greater productivity and encouraging others to become involved.”

Adopters of the code of conduct pledge to actively participate in the entity they represent, conduct themselves professionally, be open in the decision-making process, and act in the best interests of the entity and its stakeholders.

The Chamber of Commerce invites non-profit organizations, elected officials, and governing bodies to review, adopt, and hold themselves accountable to the code of conduct. Those that do adopt it are asked to inform the Chamber so they can be added to this webpage.

WHEREAS, active civic engagement, discussion, and debate are hallmarks of American society, essential to the functioning of all levels of governmental and non-governmental institutions; and

WHEREAS, conduct and communication by many elected and other governing officials has become increasing polarized and unprofessional at all levels; and

WHEREAS, this behavior does not encourage collaboration and does not support the health and wellbeing of the entities they represent; and

WHEREAS, this behavior discourages public engagement in decision-making processes essential to the functioning of governmental and non-governmental organizations; and

WHEREAS, a decrease in civic engagement is detrimental to the functioning of all levels of governmental and non-governmental institutions, as well as to the communities served by such organizations.

NOW THEREFORE, I/we adopt this Code of Conduct to foster collaborative, productive civil discourse in the decision-making process and encourage it in others.

Purpose: This Code of Conduct identifies principles for elected and appointed representatives (representative) of any government or non-profit entity (entity), while exercising their office, for effective collaboration in serving the best interests of the entity and its stakeholders.

Therefore, signatories of this Code of Conduct commit themselves to ethical, businesslike, and lawful conduct, without conflict of interest, including proper use of authority and appropriate decorum when acting as representatives, regardless of the venue or platform.

Participation. Acceptance of an elected or appointed position includes a commitment of active participation in the entity and the decision-making process. Representatives should participate in a majority of meetings established by the entity.

Conduct at meetings. The professional and personal conduct of representatives while exercising their office must be above reproach and avoid even the appearance of impropriety. Representatives shall refrain from abusive conduct, personal charges, or verbal attacks upon the character or motives of other representatives of the entity, including staff, as well as the public.

Difficult questions, challenges to a particular point of view, and criticism of ideas and information are legitimate elements of debate and discussion. However, free debate does not require, nor justify, belligerent, personal, impertinent, slanderous, threatening, abusive, or disparaging comments.

The governing body of the entity will not tolerate inappropriate behavior of these types during its meetings.

Open discussion. Discussions by the governing body which result in official actions by that body should involve all members (and the public for public entities), except when expressly permitted by Pennsylvania’s Sunshine Act or established policies of the entity.

Respect for process. Representatives shall perform their duties in accordance with the processes and rules of order established by the entity.

It is the responsibility of the chair of the governing body to keep the comments of members on track during public meetings. Representatives should honor efforts by the chair to focus discussion on current agenda items. If there is disagreement about the agenda or the chair's actions, those objections should be voiced respectfully and with reason, following procedures outlined in parliamentary procedure.

The governing body will encourage different points of view in order to make good decisions and cultivate a sense of group responsibility, putting the emphasis on collective decisions versus individual decisions.

I/we affirm that I/we have read and understand this Code of Conduct and will, to the best of my/our ability, comply with its guidance.