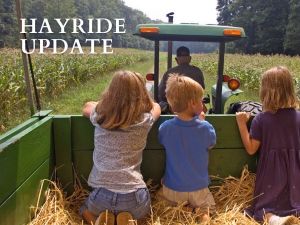 On March 5, the Pennsylvania Department of Agriculture, Ride & Measurements Standards division established a variance from the requirement that an owner of a "hayride attraction" must comply with specific provisions of the Amusement Ride Inspection Act and its attendant regulations.

The Department of Agriculture has, since 1986, had the authority to regulate hay rides as an amusement ride under the Amusement Ride Inspection Act, but since there were no standards for hay rides until 2019, they have never been regulated.

Recognizing that the standards are burdensome and seeking input from businesses and individuals whose operations these regulations might affect, PA Secretary of Agriculture Russell Redding, Director of Bureau of Ride & Measurements Walt Remmert, and Deputy Secretary for Plant Industry and Consumer Protection Fred Strathmeyer, Jr. will host the Hayride Attractions & Amusement Rides Webinar on October 5, 2022 at noon via Zoom.  To register, please email Kyle Kotzmoyer of the Pennsylvania Farm Bureau, at kfkotzmoyer@pfb.com.

Special thanks to Chamber member, Columbia County Farm Bureau, for this information!