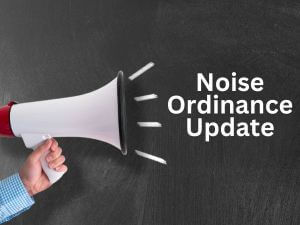 On Monday, November 14, Bloomsburg Town Council enacted amendments to its noise ordinance which prohibit sustained noises above 65 decibels between 7 a.m. and 10 p.m. and below 50 from 10 p.m. until 7 a.m. Any sound must be officially measured for more than 10 minutes cumulatively in an hour to be in violation. Fines for violating the ordinance range from $1,000-$2,000 and the possibility of jail time or injunctions for repeat offenses.

The impetus for revising the existing ordinance was concerns raised by Town residents about sound levels from auto racing at the Bloomsburg Fairgrounds. Council has been considering revisions to the ordinance since mid-2021 and The Chamber has repeatedly called for scientifically-based noise limits and compromises that benefit the entire community.

"I am here this evening to express The Columbia Montour Chamber of Commerce’s strong opposition to the proposed noise ordinance. As stated during your last meeting on October 24th, and during your workshop on November 7th, this version would result in unintended consequences. Your goal of protecting the physical health of Town residents is certainly appropriate. The 65-decibel limit recommended by your consultant has cited a document from the World Health Organization titled Guidelines for Community Noise. In that document, 65 decibels is not a threshold for protecting physical health, but rather to allow clear conversation in close proximity. Section 3 of that document, Adverse Health Effects of Noise, states, “hearing impairment is not expected to occur at levels of 75 dBa or below, even for prolonged occupational noise exposure.”

As we’ve stated previously, OSHA sets a threshold of 85 dBa over a prolonged period of time in requiring hearing protection in an industrial setting. Jeffrey Ritter is a Compliance Assistance Specialist with OSHA’s Wilkes-Barre Area Office. He noted to me in a phone conversation on October 25th that while that threshold has not been updated in 30 years, it is based on scientific data and agreement.

Even if the level is increased, this ordinance provides for acceptable forms of damaging noise, including Town-approved activities including the 4th of July fireworks and Town Park Concert Series. How is it appropriate that the Town would be able to sanction forms of damaging noise, while completely prohibiting others? Also, this version does not make clear the full scope of exempt activities, such as routine lawn maintenance with gas-powered lawnmowers and leaf blowers.

With these issues, it appears likely the ordinance will be challenged, resulting in legal costs for the Town. This will divert financial resources from areas and potential projects that could be used to further enhance the Town and/or result in a tax increase.

"We are hopeful that Council will refine this ordinance over time to address the concerns we've raised."

Read the full text of the newly-enacted ordinance here.