The new Bloomsburg rule would have unintended consequences for businesses and residents. 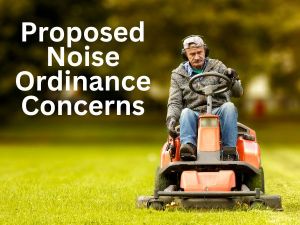 Bloomsburg - On Monday, October 24th, Bloomsburg Town Council voted to advertise an ordinance that would establish noise thresholds for activities and events conducted by residents and businesses. The ordinance is in response to concerns about motor racing at the Bloomsburg Fairgrounds in 2021 and 2022. Chamber president Fred Gaffney asked Council not to move forward with the ordinance. Council members Bonnie Crawford and Nicolas McGaw voted against moving forward, citing concerns about the sound level.

The ordinance would set a limit of 65 decibels between 7 a.m. and 10 p.m. and 50 decibels between 10 p.m. and 7 a.m. for a cumulative period of more than 10 minutes in any one hour at or within the property boundary of any residentially-zoned property. Fines for violating those levels would be $1,000 for the first offense and $2,000 for each subsequent offense.

According to the U.S. Occupational Safety and Health Administration (OSHA), conversation at a 3-foot distance is approximately 60 decibels. The agency sets a threshold of 85 decibels over an extended period of time for requiring hearing protection in industrial settings. That standard has been in place for approximately 30 years.

The draft exempts certain sources, including emergency services, churches, Town, county, and state events, public works, and school-sponsored athletic or recreational events. While activities at the Fairgrounds during the Fair would also be exempt, motor racing and motorized vehicle exhibition activities at the Fairgrounds at any time of year would have to comply with the noise limits. However, activities including lawn mowing, leaf blowing, and business operations above 65 decibels but within OSHA noise standards, would not be expressly allowed.

“Therefore, we are asking Council to not move forward with this draft, as it takes an extreme position that could result in many unintended consequences,” said Gaffney. “We are asking that Council find reasonable compromises for the benefit of the entire community.”

Council is scheduled to vote on the ordinance as advertised at its next meeting scheduled for Monday, November 14th at 7 p.m.