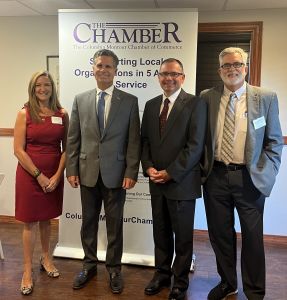 While critical of the spending levels in several recent packages passed in Washington, Congressman Dan Meuser believes there are solutions to strengthen the U.S. economy and begin to reduce debt. Meuser (PA-9) discussed the factors contributing to inflation in a breakfast meeting with members of the Columbia Montour Chamber of Commerce on Thursday, August 25th. The program was sponsored by PPL Electric Utilities and hosted by Craft Catering. 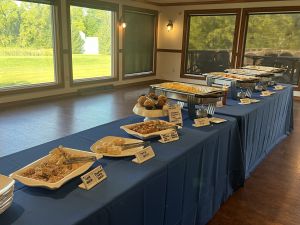 In an update that included the Congressman’s committee service and recent legislation, Meuser shared that as a member of the Problem Solvers Caucus, he worked with colleagues from both parties to advance the transportation infrastructure package that was passed in late 2021, as well as the CHIPS Act, designed to boost the domestic production of microprocessors. The Congressman was not in favor of the final versions of either bill, due to billions of dollars in spending added to both. While he supported large spending packages during the early days of the COVID pandemic to support employers, the medical industry, and displaced workers, Meuser believes reductions in spending are necessary to curb inflation.

Meuser stressed his vocal opposition to the recently passed Inflation Reduction Act, which he argues will have the opposite effect on inflation - increasing taxes on energy and implementing a minimum tax on corporations. The bill also doubles the number of IRS agents by 87,000, a staffing increase that, according to the Congressman, will not generate the additional projected revenue due to the urgent need of the agency to update its processes and quality of information. While the legislation stipulates that businesses and individuals earning less than $400,000 will not be audited, 91% of current audits are conducted on those earning less than $400,000, according to Meuser.

Switching from domestic spending to foreign affairs, Meuser believes that, despite an over-reliance on goods produced in China, our significant trade relationship will help avoid an invasion of Taiwan. Stressing the importance for the U.S. to be more competitive globally, he noted that the 21% corporate tax rate is “in the middle of the pack”. From a domestic security perspective, he also discussed the need to revisit polices related to Afghanistan and southern border security, sharing insights he’s received from military and border patrol personnel. 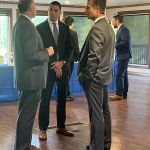 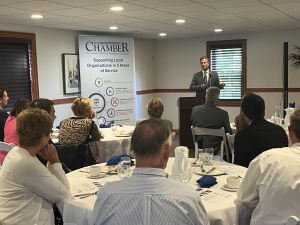 As the 9th Congressional District is set to expand geographically as a result of redistricting, guests at the event expressed gratitude for the Congressman’s engagement with the Chamber. Concluding the event, Chamber President Fred Gaffney informed participants that the Consumer Financial Protection Bureau may be revising “employer-driven debt” policies that could make hiring employees more challenging. Employers have until September 7th to provide comments.